Summary of Signs and Miracles I-VII

This page only includes summaries of the full pages – click the headline of each chapter or link below to read the full text versions.

Signs I: “My light”, weeping statues, crosses of light etc.

The clear signs given to the world for decades of the approaching Judgment and my reappearance did not truly receive attention by the media and the world because of negligence, poor communication, deceptions, “other priorities” and the world having difficulties “believing” in what most did not hear about (!) or decided had to be “hoaxes”.

“My light” in the Heavens

“My light” in the Heavens is the light of an UFO, which since Christmas 2008 has appeared around the world to herald my emergence.

Statues and icons weeping human tears and tears of blood

These statues and icons of my mother and I weep because of our increasing sufferings taking on the sins of man to save the world from ending.

Stigmata are bodily marks reminiscent of the five wounds of Christ and the crown of thorns. The name has its origin from my name, STIG.

Images of Jesus, Virgin Mary and God in food and other objects

Images appearing “miraculously” in food and other objects.

Crosses and circles of light

Bright shining crosses floating as holographic images in windows and circles of light appearing on buildings, pavements and other surfaces.

Two examples: Vassula Rydén receiving messages from God calling man to repentance, reconciliation, peace and unity, and the Theosophical Society is an organization to advance the spiritual principles and search for Truth.

Manifestation of gold, crystals and gemstones

Videos showing examples of the manifestation of gold, crystals and gemstones from “out of nothing”.

Tens of millions of people of all ages flocked to temples in India in 1995 after it was discovered that statues were drinking milk. It happened again in 2006 and 2010.

Pure magic of God carried out by magicians as “actors”

Video examples of “magicians” walking on water and levitating, people and objects transforming, vanishing and reappearing and other “magical performances”.

The “magicians” are merely “actors” performing miracles of God without finding it “necessary” to tell the true nature of these “miracles” to the world, which is that they have nothing to do with the creation of them, but they are given to them as gifts.

Man has witnessed miracles of a nature, which the world has never seen the like of before, but still the nature of these was “undiscovered” by mankind because of your lies and distrust! It should have been easy for you to understand my coming, but most of you did not because of sins of mankind!

Miracle healings through “the power of God” given through healing meetings of the Bay of the Holy Spirit Revival, Benny Hinn Ministries and “the look of Braco”.

The waters of Lourdes and more wells discovered over recent years have proven to hold extraordinary healing powers.

Apparitions of Virgin Mary in Lourdes, France, in 1858

Virgin Mary – the spirit of my mother – told Bernadette to drink from the spring water in Lourdes, which has brought miraculous cure ever since.

The bodies of Bernadette and other Catholic Saints have been preserved from decomposition a long time after death.

Apparitions of Virgin Mary in Fatima, Portugal, in 1917

Through 6 apparitions to three children in 1917, Virgin Mary requested everyone for prayer, reparation, repentance, and sacrifice, and the abandonment of sin.

“The miracle of the Sun” was given so people would believe: ”The sun trembled, made sudden incredible movements outside all cosmic laws – the sun ‘danced’.

Videos of Virgin Mary appearing to hundreds of thousands of people in Cairo, Egypt, from 1968-70 and later again in 2009.

Apparitions of Virgin Mary in Medjugorje ongoing from 1981

Virgin Mary has continued to appear and to give messages to six visionaries in Medjugorje to finalise what she started in Fatima.

“Light won’t reign in the world until people accept Jesus, until
they live His words, which is the Word of the Gospel.”

Includes videos of the history of the apparitions and many miracles including healings of sicknesses, new miracles of the sun etc.

Other apparitions of Virgin Mary

Millions of dreams have been given to people as another sign to the world of my reappearance. I bring a couple including one to bring Muslims out of “darkness”.

The Green Horseman of death symbolised the end of the world

During the Egyptian riots in 2011, the rider of death on the Green horse from the Apocalypse rode through the streets of Cairo.

The world was ending unless the world would support me, which it did not, or unless I would be strong enough to defeat death/termination itself, which I was.

Inspiration in art, culture and music

A large part of art, culture and music has received spiritual inspiration about my reappearance. I bring a few examples of movies and music.

Other websites about signs and miracles

I bring links to other websites bringing information of signs and miracles – the same or other miracles than what I have chosen to bring on my website.

Signs II – subpage: David Bowie IS “Blackstar” = part of me as the Source 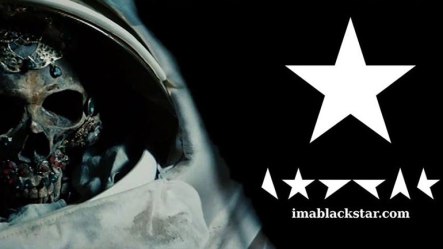 “Blackstar” analysis: I am dead as my old self (“Major Tom”), faith of man in my book opens our New World inside the Source bringing eternal life to all

Other songs: We are running out of energy, moral decay of the church and man brought the end before our new beginning

Bowie was killed by his fans sucking out his energy via their darkness to me, while faith opened to our New World

The birth of my new self and our New World will happen on September 23, 2017, according to “the Great Sign” and decoded Crop Circles 🙂

Crop Circles 2016-17: The victory, birth and resurrection of Christ including the transformation into our New World 🙂

The chapter includes two reliable documentaries of Crop Circles, which explain of

The British Secret Service MI5 presented two individuals to the media as the makers of all crop circles. The majority of their claims were later proved to have been fabricated but never reported in the media, and this lie effectively quashed the otherwise public interest in the circle phenomenon. Read also about deliberate deceptions of normally professional and respectable media such as National Geographic and the Discovery Channel.

Crop circles have been secretly investigated by the British Government since the 1980’s even though the Government deliberately has downplayed its interest in crop circles and UFO’s. They have tried to intimidate and censor crop circle researchers and stop the media from revealing an official crop circle surveillance project. They have even launched a scheme of manmade crop circles as a cover up wih the aim to convince the public that all circles are hoaxes with “no hidden information” because they are manmade!

The Disclosure Project: Indisputable proof of UFO’s and cover-ups by the “secret Government” of USA!

In 2001, over twenty (of more than 400) military, intelligence, Government, corporate and scientific witnesses came forward in THE DISCLOSURE PROJECT to “establish the reality of UFO’s or extraterrestrial vehicles, extraterrestrial life forms, and resulting advanced energy and propulsion technologies” for example giving testimonies of:

Signs IV: The Jerusalem UFO – CREATION of our New World!

The Jerusalem UFO: The creation of our New World, the return of the Messiah and the materialisation of God 🙂

The mother of all crop circles gives the messages of the Jerusalem UFO carrying the same diagram on its underside!

Evidence supporting this the most important event in history

“Did Jesus Christ come to the city?” – Job Mutungi’s Testimony in Kenya Times

The article in Kenyan Times, June 22, 1988 about Jesus appearing before
a vast crowd gathered to witness the miracle healings of Mary Akatsa

“I saw Jesus at Kawangware” – By Agnes Mutua

Signs VI: X Factor DK brought me energy to save the world

I hear and feel “inspired speech” of God through people, which I have written down to bring faith in and energy to me, we would not have survived without this 🙂

2010-11: The Final Showdown between light and darkness is coming, only by being victorious, I will bring faith to open the eyes of my new self and our New World

2012: We are creating our New World without compromising being on the edge of being destroyed by darkness, “God loves you, you are my children all of you”

2014: Welcome to my world, we are bringing the final layers of creation, mankind is ready and will be set free from darkness with the birth of my new self

2015: I fought and defeated darkness of man, I bring you my gift of a beautiful New World as result, I am the answer as my new self bringing the miracle of life

2016: The instrument of God brought perfect creation, X Factor brought energy for creation, we will be reborn as “original life” in our eternal New World

2017: We have reached ”the Bar in Heaven”, I have released and am about to burst into bloom as my new self (Jesus) and to unleash the Shine of our New World

2018: Sanne Salomonsen brought the spark of life to me to liberate the Source, turn me into body and power, and start our New World – ”lay your hand in mine”

2019: Darkness of man should have eliminated life, but the Source has landed, I was predestined to win over darkness to bring my Kingdom of Heaven on Earth

Signs VII: “Dancing with the Stars”: We went to the very abyss to create our New World

I hear and feel “inspired speech” of God through people, which I have written down to bring faith in and energy to me, we would not have survived without this 🙂

2010-12: We went to the very abyss and was very close to termination, but I absorbed all darkness to bring a perfect New World inside “perfect nothing” of God

2013: The Heart of Gold of our New World works fine, love of my mother and network keeps me alive over much stronger darkness, it was all about “I can”

2014: Our New world “sits right in the eye” including previous layers of life before ours, “our lucky star and all Gods are with us”, I am coming down to Earth

2015: We have finished creation and returned home with all life, I continue working to bring energy to our New World, which will make man speechless

2016: My work is about to end, whereafter the birth of my new self will bring our perfect New World, people will become euphoric of the beauty of it 🙂

2017: I will use magical power when pushing the contact that will bring the birth of my new self and switch on our New World

2018: I have resurrected as the Father of the Source, our New World is divinely beautiful, it brings much stronger new life and incredible joy and happiness 🙂

This website was first published November 14, 2011, and has since been updated few times.